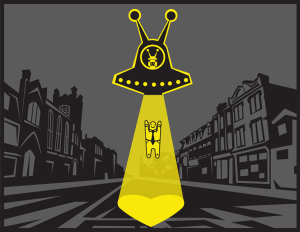 A bizarre but true story, and though it may verge upon self-indulgence, i pray that in the end it may be seen for its intent:

In grade school, likely 2nd or 3rd grade, i remember not which, i began to develop a series of fictions for creative writing assignments.  Generally, the expectation was that a student would produce a minimum of one page, or two pages, or 100 words.  It was my third installment in the series, and i was scrambling to complete it the day of class.  i was given to procrastination, it is true, later in my academic career, still later outright neglect, but such was not the case when i was young.  At the time i took assignments seriously, and this one was to be my tour de force.  As the beginning of class approached, i knew i was in trouble.  i wanted to be done already, wanted to have been done long ago in fact, but the words simply would not cease, and i dared not force them to do so.  The twists, the tangles, the quips, the quotes, the plots: all were writing themselves.  And they were not on the same timeline as i.  Striking a balance between speed and legibility then, i plummeted toward the end, indulging every whim of tale and fancy, weaving a saga of alien abduction and adventure and social commentary and uncanny bravery which became an instant classic upon completion, not so much for its content but for its reach and ambition.  Where other students were slogging laboriously through two pages, swollen letters clogging the pages, two words to a line (clever-grin faces beaming as if the thought of inflated handwriting were uniquely and originally their own), i had crafted a near novel of seventeen pages in length, and small handwriting at that!  So incredible was this feat, (and i wish i were joking here), that friends of mine were standing around watching me write as the black hands of time circled around toward 8:00 am.  With a flourish, a sigh, a middle-finger callous pulsing like joggers’ legs post-run, i laid my pen aside, closed the opus, and turned it in just in time.  I got an A.

Now to the point: no one taught me to do this.  Some people look at a blueprint, a piano, an equation, a computer, and it simply makes sense to them.  Writing was like this for me.  It just happened.  It was unbeckoned, uncoaxed, and unbridled.  It was natural, graceful, simplistic, and fulfilling.  Stories, essays, poems, plays, my hand would churn them all out.  Until, sometime later, some sad thing after taught me to fear.  As age increased, so did carelessness, inadequacy, apathy, blindness.

At first writing grew merely tedious: somewhere enjoyment had been squeezed out of it by demand and pressure; but then it became dark, then spiteful, then cruel and bitter, and finally, once it was not mandatory anymore, (though i wish it had done so before it grew angry) it ceased altogether.  Reading through my journal from my senior year in high school recently, i discovered darts of death i could not now pen about my worst enemy.  Tiny phantoms of pain, venomous spit of some infested bleak heart that found its only joy now not in the sheer act of creation, but in destruction instead.  i ceased writing seriously after that for a long while.

it is late that i return to my original joy.  Oh, there have been half-hearted attempts through the years.  But no one wants to receive directions from the man who is constantly lost.  And somewhere, i knew this.  Everything i set down sputtered, died, the gas spewing violently out upon second read, not even through the courteous mechanism of a slow leak, but as if the balloon were simply released mid-inflate.  Everything attempted was flat, translucent, sickly white leaves whose shape was right but interior lacked the will to sustain.

Christ entered my life in the same fashion as my gift: unbeckoned, uncoaxed, unbridled, unrestrained.  It was not until i met Him that i began to have a reason to speak again.  All fleeting fantasies, all shallow philosophies, all knock-kneed addle-headed conceptions of truth i once held dear now fled as roaches from the Light.

it is late, then, that i return to my original joy: Christ, in whom is all joy, all gift, all grace, all purpose.  And if indeed He has seen fit to install a software set in my hard-drive whose capacity is for producing words, then i can run from it no longer.  i was afraid, i will admit, afraid to speak lest anything i say be irrevocable and ugly scant moments later.  But now i know truth.  And not only is it my purpose, my duty to share, it is my gain.  In all things, Christ overturns the mode.  Thus though we understand life as receive in order to give, He brings us the chance to give in order that we might receive.  And i aim to do this.