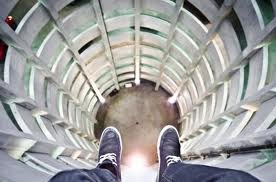 When i was a closet smoker, there was some kind of tendency in me to always try to get one last cigarette in before i had to start faking at being a non-smoker. Some compulsion, some driving need to indulge my pleasures that manifested itself in getting as close as possible to being caught without actually being caught. So i would smoke last thing before i got home, on the way home in my car, or just before leaving work, never content to let the last one i had be the last one i had, always trying to connive a way to sneak in one more. What i have come to realize now is that this phenomenon is by no means unique to that particular sin.

It seems that i am always trying to find the answer to the question “how far is too far?” Mostly, i want to know so that i can walk right up to that point and lean as far over the line as possible without actually stepping foot on the other side. How sarcastic can i be before i genuinely hurt someone’s feelings? How passive-aggressive can i be with my boss without getting in trouble? How lazy can i be before i get called out on it and have to step it up and do some work?

Given the Scriptures take on sin, i am certain this is an unhealthy attitude. Not only are we to not flirt with these behaviors, we are to get as far away from them as possible! Thus we are commanded to “flee from sexual immorality,” “flee from idolatry,” and “flee youthful passions and pursue righteousness, faith, love, and peace.” Rather than turning in the opposite direction and running for my life, instead most of the time i find myself inching ever closer, trying to see the casualties from the train wreck without actually being a part of it myself.

The same principle applies in the inverse when thinking about the good i ought to do. My natural tendency is to want to stop when i have done just enough. i am definitely not alone here, this much i know. In fact, so many laws and regulations were given to the Israelites to follow that i am certain they were experiencing the same tendency, and God knew it. He knew that unless He outlined for them ad infinitum how they should behave in every single circumstance, at their best they would do only as they were told and no more.

At their worst, at my worst, we don’t even try to do that.

So when Christ bursts on the scene and follows every law perfectly, even when doing so does not look at all like what the Israelites thought it did, He quickly obliterates the Guinness Book mark for Holiest Hebrew. But He does not allow this to be His primary goal; instead, He allows His purpose and His focus to be reaching the disenfranchised in any way possible, whether it “violates” the law or not. By doing so He demonstrates in word and in deed the true purpose of the law. It is not that we do these specific good things and don’t do these specific bad things, it is not that we conform to a pattern of behavior that, though seemingly arbitrary and somewhat outdated, somehow pleases God. If the point of the law was to please God in the first place, then it is God’s pleasure that we should be seeking, and not the law itself.  So many times and in so many ways Christ tells us to go far beyond what the mere law suggests, and live as though a people possessed. The Sermon on the Mount, almost in it’s entirety, is all about this. Almost every sentence is “You thought this was the case, but i tell you it is really this instead.” Just as one example, though Matthew 5 is chock full of them:

“You have heard that it was said, ‘An eye for an eye and a tooth for a tooth.’ But I say to you, do not resist the one who is evil. But if anyone slaps you on the right cheek, turn to him the other also. And if anyone would sue you and take your tunic, let him have your cloak as well. And if anyone forces you to go one mile, go with him two miles.   – Matthew 5 : 38 : 41

Am i to understand that He wants us to take this commandment literally? That if someone sues us, we should give him twice as much as he is asking? I can’t imagine, given His own life, that He meant it in any way figuratively. Given the amount of effort He put into pursuing sinners, i think it a pretty reasonable assumption that He meant for us to do the same.

Can you imagine the opportunities this would create to share the gospel if we truly lived like this?

If i put as much effort into trying to find creative ways to love instead of creative ways to sin, i could stop living in the mediocre wasteland of intellectual assent and dogmatic belief and start experiencing the gospel for what it was meant to be: a joyous promised land of fulfillment and unity.