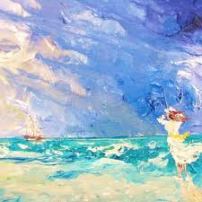 The weeks after the announcement were sluggish, ghostly; blurry and fake. Asha awoke each day, went and worked in David’s fields, ate when she was hungry, which was not often, then slept, dreaming of David. At times the dreams were vivid and wonderful. He was returning in a cloud of glory, sword held aloft, red velvet robes encircling his shoulders, and Asha was rushing out to meet him. Other times they were not so pleasant. He was dragging himself across some barren field, shattered legs mangled and burdensome, having no hope to make it home but trying anyway. She did not sleep well during such nights. She was sleeping less, in general, not due to any anxiety or malaise, but because she knew that David would return, and she did not want to be asleep when he did. She would wait late into the night at the dock, wait alone, of course, because no one else had any hope, but she knew. She would rise very early in the mornings to sit on the dock for an hour or so before the village had roused. She took her meals there, too, when there was time, when what was served to her was portable enough for travel.

The villagers were talking about her, she knew. They thought that she didn’t notice their sidelong glances, their hushed tones, their mumbles and whispers, even their muffled chuckles when she passed. She noticed, but she didn’t care. They thought she was the fool, but when David returned it would be they who were the fools. It would be they who were embarrassed, because they had not hoped in the promise. She smiled at everyone she passed, refusing to let on that even though she still held on to hope, desperation was growing in her a little each day. At first there was not even a hint of it, and there were even a few others in the village that, like her, were furiously clinging to the promise of their loved ones’ return. But as days became weeks, little by little the faith waned in all but Asha, until she became the lone hold out; one surviving warrior pinned up in a cave, surrounded by fear and death, sword unsheathed, ready to die pure. Most of the village had accepted the news sadly, but had moved on rapidly. For a few, mostly the elderly, this was the result of callousness: witnesses of many years, survivors of many battles themselves, they had seen friends and loved ones perish many times before. The news was as a vicious storm to them: ugly and fierce while arriving, but come and gone with little lasting effect. Most, however, were not as embittered as these, but there was simply no alternative but to move on. The death of loved ones had been a possibility from the outset, and though the pain was never to go away fully, it had not stopped the changing seasons. For these residents of the tiny coastal town there was catharsis, almost therapy, in work: without it, there would be only wallowing, worsening, and weakening.

Asha, however, refused to be a part of this. She went about her work enthusiastically, not because it was a way to forget David’s alleged death, but because that was how faith in his inevitable return manifested itself in her. She did a fair job, of course, the best she could, but though the work was becoming increasingly less fruitful, she did not fret. Whatever she did not accomplish rightly David would soon come to mend, and this thought became her only reason to genuinely smile.

Asha huffed in frustration. Somehow the only thing that seemed to be flourishing in David’s field were weeds. They needed very little in the way of water, of course, while crops needed much, and water had been scare for the last few weeks. Rain was always somewhat sparse during this time of year, but it was excessively so this year, and Asha was beginning to fear that David’s family would have no yield at all. With each passing day, Asha used less and less water for herself and spared as much as she could for the crops, but this of course made her a poor laborer. The problem was cyclical: the worse the field became, the more she worked without rest or nourishment, and the less effective her work became, and thus the more work was required. For this situation, too, her desperation was growing, growing much faster than the crops, not seeming to suffer from the same lack of nourishment as the physical world. No, in contrast, the dark gardens of her despair were flourishing, their canopy enclosing to guard against the encroachment of light.

Martha, standing in the shade of the doorway to her home, was watching her intently. Asha may have thought she had everyone fooled by covering the tracks of her emptiness with branches of smile and diligence, but Martha was not misled even slightly by this crumbling facade. In fact if anything, it only added to her concern, because of all the people in the town Asha was the only one remaining who had yet to acknowledge the truth of David’s death. And there was no way for her to heal from this wound if she did not admit its existence.

After she had given supper to her children and set the infant down to sleep, she called Asha into the house. The two older boys were scurrying out of the house to go play in the waning hours of daylight, wooden sticks in hand that assumedly would end up as swords or arrows. Asha smiled at them lovingly as they nearly bowled her over on their way out of the house. As the girl entered the home, Martha could hardly contain a weighty sigh. Up close, Asha’s appearance was even more startling than she could tell from a distance. Her weight had dropped substantially in the last few weeks, and deep dark circles of worry hovered under her eyes, wolves ready to devour at the first opportunity.

“Sit down, girl,” she said, and even this action seemed to require a great effort on Asha’s part. Martha brought two cups of tea from the stove and set them on the table before seating herself across from the girl. She looked up at her son’s beloved, and smiled a tightlipped flat smile that had nothing to do with joy. She gathered her thoughts for a moment, steeling herself against the inevitable counterattack.

She began quite slowly, carefully, delicately, as if by mere tone of voice she could shatter Asha’s dead-branch-thin frame. “I want to talk to you about something very important, and I feel as though I know already what you are going to say in response, but I must ask you, since I am both your elder and the mother of your betrothed, to listen fully without interrupting me.” She wondered greatly at the wisdom of playing along with Asha’s fantasy that David was still alive, but in the end decided that should she confront that misconception from the outset she would have no chance of getting the girl to listen to anything she might have to say. Asha said nothing, a tacit consent to Martha’s terms, though her face betrayed that this agreement was only out of respect and not because she believed she was about to hear anything she hadn’t heard a million times already.

“I am very worried. Very worried, my dear. Your health…you aren’t…” She stopped, to begin again, even more tenderly. “As much as I appreciate your hard work in the fields, and believe me I do, for it would have been very difficult to manage them without you, I feel that you are not taking care of yourself as well as you ought.” Asha was already rolling her eyes, but Martha pressed on. “Dear, you are no good to me out there if you aren’t well enough to do the work. And I cannot bear the idea that I am even partially responsible for your declining health. Because of this…” Martha’s convictions were wavering, and she did not know what to do but trust her instinct. It was possible she was making a huge mistake, that this would only drive the girl deeper into decline, but she felt there was no alternative. “…because of this I do not want you coming back for a while.” And Asha was already opening her mouth to protest but Martha raised a hand to the girl to silence her. “Remember, you agreed to hear me out. And my decision is final.” Oh, that sounded so much more certain than she actually felt. What if she were taking away the one thing that was actually keeping the girl sane, the one thing that was giving her something to think about other than David, something to hope for and believe in other than his fabled return? “I will not have you dying out there, even if your work is important, because you refuse to take care of yourself. I care about you too much to watch that happen. I don’t want you to worry about my fields for a few weeks at least.”

“A few weeks?!?” Asha could contain her incredulity no longer. “Everything out there will die if I am gone that long!”

Martha’s voice was firm now, her conviction growing in strength. “Girl, surely you don’t believe that I have not thought of that? I will find a way to get the necessary work done. I can do some myself, I have two children that are old enough to weed and hoe, and there are others who will be willing to help. We will manage. We did so long before you came along and will do so now without your help. You must go home, and get some rest, and get some nourishment, or you will soon not be fit for anything but burial yourself!”

The words were harsh, and though she had not meant them to do so, she could see in Asha’s face that they alluded to David’s death. And there was both fury and betrayal, insolence and hurt in the girl’s eyes as she spoke. “I see. I thought you believed, too, that you understood me. But I can see you have given up just like everyone else has. No wonder you want me to go.”

Martha was shaking her head, strongly but sympathetically. “Asha, dear, it has nothing to do with that…”

“It has everything to do with that! I am the only one who believes in this whole town, and everyone thinks I am a fool because of it!” The girl was nearing tears now, a girl who was usually so strong that almost nothing could have brought her to this point of emotional fragility. “I hear the talk! I know what is going on! And of all people, I thought that you understood! I see now I was wrong.” She rose abruptly, wiping tears with the sleeve of her shift, leaving streaks of dust across her face.

“I do understand, girl. I do,” she said to the girl’s back. “That’s why I am doing this.” Asha huffed and ran out of the house sobbing.

Martha sat in the cool shade of her house for a time after that, staring at nothing, both cups of tea sitting untouched and cold on the table.